In the vast world of grand touring coupes, the Bentley Continental GT fills the niche for wealthy drivers with an eye for luxury, in addition to impressive performance. The newly introduced third generation continues the model’s posh legacy with opulent details like an infotainment system that hides behind the wood veneer on the dashboard and the choice of 15 available colors for the leather upholstery. To get a better idea of how the latest GT evolves, let’s compare it to the last one. 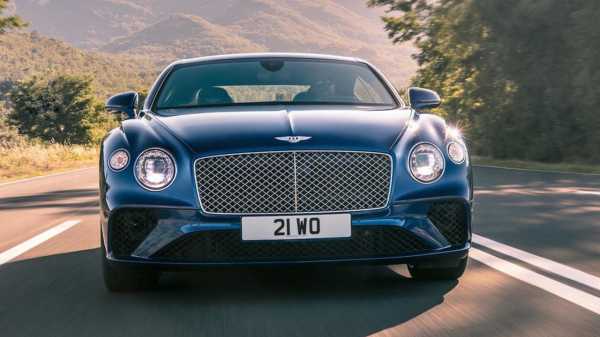 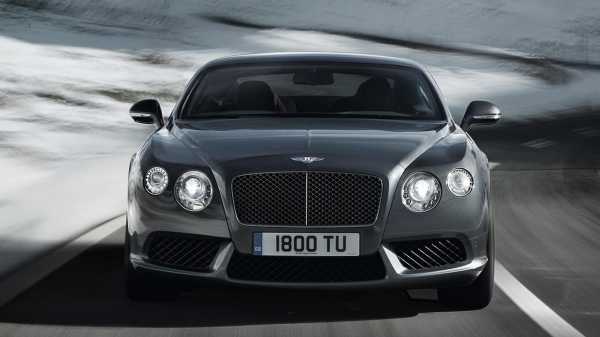 The new Continental GT retains the big coupe's design DNA of combining a broad, mesh grille with a pair of lights on each side. However, the 2018 model now features sculpting around the lamps that integrates them better into the front end. It's an attractive, almost retro detail, that makes the nose look more aerodynamic. 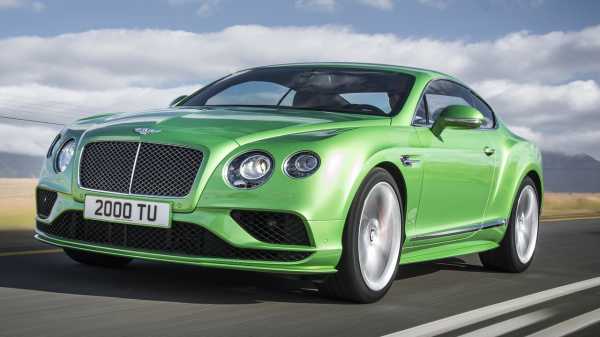 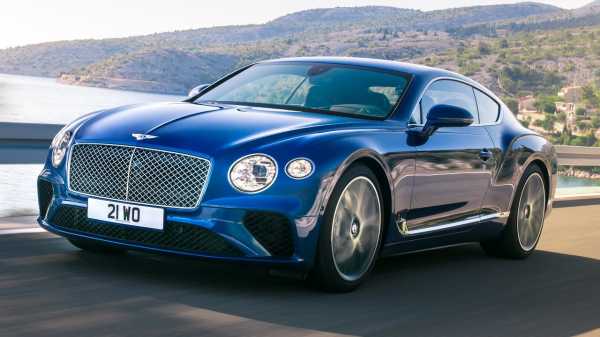 The 2018 Continental GT's front three-quarters perspective highlights the new creases that start at the headlights. It also features redesigned mirrors that taper to a point and magnify the coupe's more aerodynamic appearance.

The chrome strip along the side sills is thicker now and kicks upward near the front fenders. The change transforms the piece from an unassuming bit of trim into a major part of the profile styling. 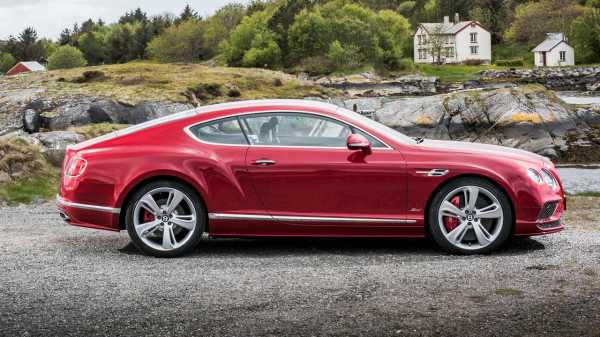 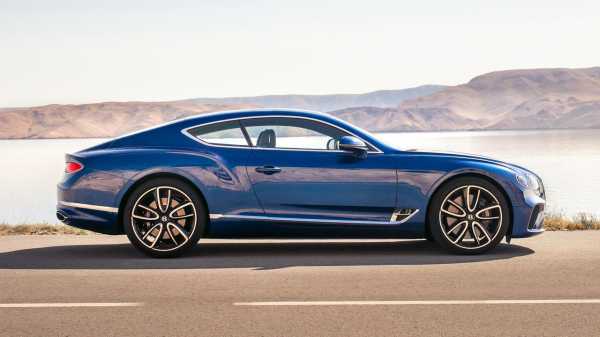 The side of the new Continental GT is where the changes for the new generation are least obvious. The nose is a little rounder, but you need to look at the rear of the roofline to see the biggest tweaks. Rather than flattening out as it reaches the tail, the top now flows backward in a constant arc. The small adjustment creates a more slippery looking shape for the big coupe. 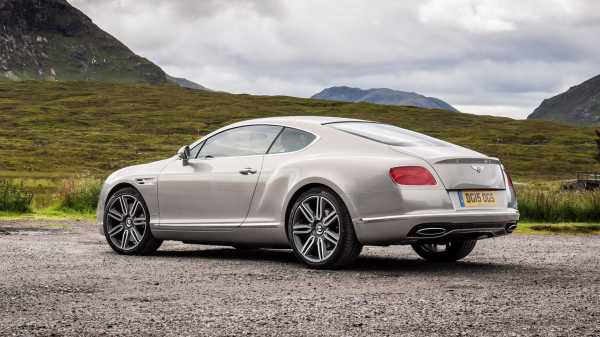 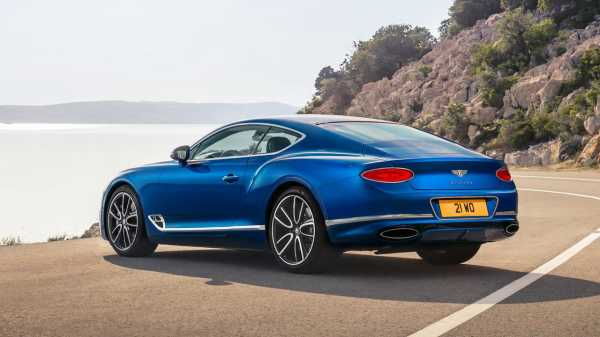 Bentley overhauls the styling for the Continental GT's tail. Oval-shaped taillights replace the previously rounded rectangular units, and the tailpipes carry the same design. The new roofline also shifts the top of the trunk lid lower onto the back end. In addition, the chrome strip along the side now wraps around the rear rather than stopping at the fenders.

Like the rest of the new design, these changes combine to create a coupe that looks more aerodynamic than the outgoing Continental GT. 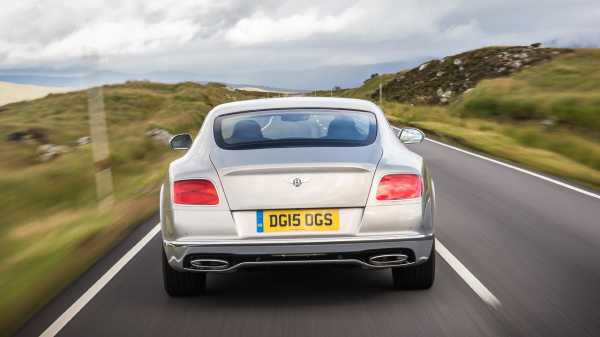 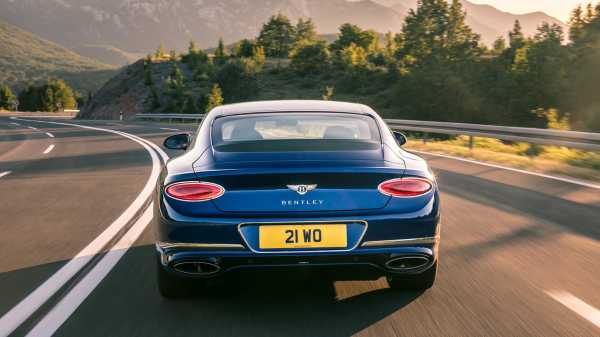 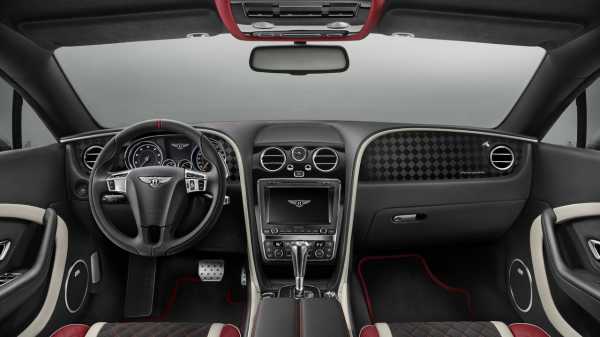 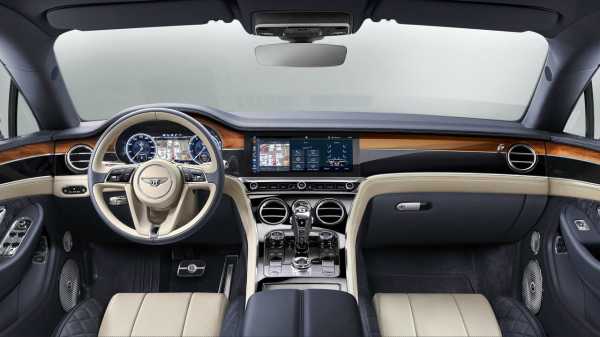 The 2018 Continental GT's cabin features revolutionary updates versus the old model. There's now a digital instrument panel that can display things like navigation data directly in front of the driver. The really cool new feature is on the center stack where the 12.3-inch infotainment display rotates into the dashboard when not in use (see it in action, here). This trick might not be very useful, but it's impressive to watch. 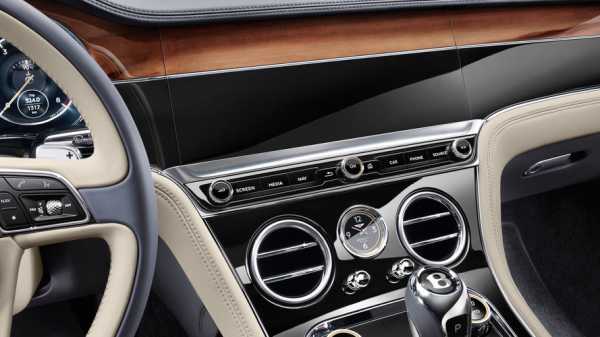 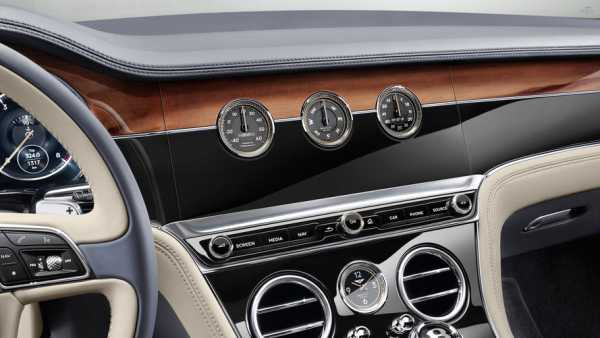 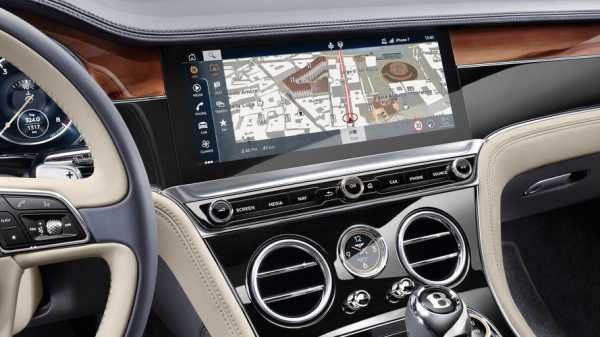 Bentley Continental GT – attractive, luxurious, large and comfortable car that has everything we could wish for passengers and the driver. The first generation of this model has been presented general public in 2003. The second generation of this model was published with improved design and appearance with an entirely new powertrain, but the car did not get much change except for this. And today we meet the third generation of the famous car, which is and will be devoted to this material.

The release date of the new 2017 Bentley Continental GT is not known yet, but expected in 2017. 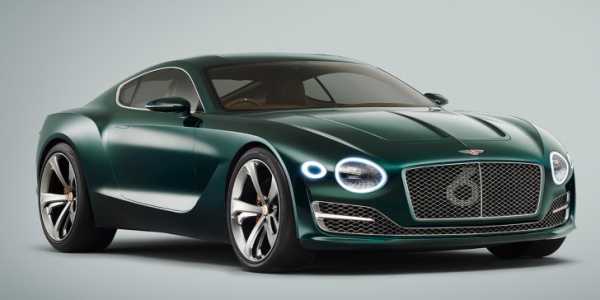 Unfortunately, the price of the third generation Continental GT is not currently known, but there is information that the vehicle will no longer be the most affordable model of the company. The company is already in full force headquarters working on a compact coupe EXP10, which will be offered much cheaper than the new coupe Continental. New Continental will be available from around $ 205,000.

The manufacturer of premium cars from the UK will present next year the latest generation of Bentley Continental GT coupe in 2017 on a completely new platform. This news has pleased a lot of loyal fans of the British manufacturer, since the current version of the car is released on the same platform for ten years.

This information was able to obtain from the British media. The next generation of the Continental GT Bentley’s will be developed on a shortened version of the VAG group platform. MSB-platform will also be the basis for a new five-door model in Porsche Panamera hatchback. Thanks to her, the coupe will lose a lot of unnecessary kilograms of weight. It is very good as this car weighs more than 2,000 kg.

I would like to say that last year the curious Photospies managed to capture this car, but at that time the car was well hidden camouflage, and see its features, detect changes was impossible. Just recently, the manufacturer once again brought its new coupe on the road test. Paparazzi, seen on the roads of novelty, made a couple of good pictures and posted them online. Thus, the basis for the design of a new generation Continental GT Bentley EXP Speed 6 fresh concept will be taken.

This suggests that the dramatic changes in the exterior novelty should be expected. From the innovations we can expect a new design front and rear lighting, front and rear wings, as well as the grille. Judging by the placement of your photos, and the fact that the novelty appeared before Photospies without protective camouflage, we can conclude that the car is almost ready to debut.

With regard to interior decoration trends information yet. Presumably, the center console and the instrument panel will receive some changes. Of course, entertainment and information complex of the latest generation will be located inside the cabin. The car is packed with the most advanced auxiliary functions and safety systems. According to the manufacturer of interior Continental – this is truly a great place for hanging out in an environment of luxury and comfort.

Not so long ago, introduced in Vienna W12 powerplant from the company Volkswagen, will have to act as the “heart” not only for the fresh crossover from Bentley, but also for the future generation Continental GT. This engine is equipped with a double turbo, its peak power is fixed at around 608 hp and torque to 900 Nm. It is expected that with this engine, the new Bentley will accelerate to the first hundred in less than four seconds and a peak speed will exceed the threshold of 300 km/h, unless the engine is not equipped with limiter.

As stated by representatives of Volkswagen, used in the Continental GT six-cylinder engine is one of the most efficient engines in its class. Under the hood, the new coupe should also expect four-liter V8 engine, which is equipped with Audi A8. In the case of this vehicle, this would be the base motor model. Dynamics of the third-generation Continental GT is an improved, including, thanks to a significant reduction in vehicle weight. In addition, experts do not rule out the future possibility of a hybrid version of the car.

Bentley Motors has created an exclusive First Edition of the all-new Continental GT. This ultimate expression of the Grand Tourer represents the pinnacle of Bentley craftsmanship, handcrafted and designed in Great Britain.

Exquisitely appointed, the interior specification of the Bentley Continental GT First Edition has been painstakingly curated by the Bentley design team. The new model combines all the finest features available on the third generation Continental GT, brought together to create the most luxurious Grand Tourer ever produced.

A stunning showcase of technology and design, the First Edition includes the unique Bentley Rotating Display. This system enables the driver to seamlessly switch between three different fascia panels to suit the mood of the cabin. The default 12.3” touchscreen can be substituted with a more classically styled instrument display if preferred; one that features three analogue dials. When the engine is off, the third veneer-only face is displayed for an uninterrupted flow of wood right across the dashboard.

Customers can choose from one of four unique Dual Veneers for the dashboard fascia. These beautiful wood options include Tamo Ash, Liquid Amber, Dark Stained Madrona and Dark Fiddleback Eucalyptus, always combined with Grand Black, which is exclusive to the First Edition.

These exceptional finishes help create the impression of even more space inside an already sumptuous cabin, and complement a striking interior design that is beautifully enhanced by mood lighting and illuminated sills emblazoned with ‘Bentley’, visible when opening the doors.

The specification is complemented by diamond-in-diamond quilt pattern on seats, door panels and rear quarter panels, all featuring a unique contrast stitch only available with the First Edition.

Other key additions to the ultimate list of standard equipment include the City Specification and Touring Specification, with features such as park assist, pedestrian warning and traffic sign recognition. The Bentley 650 watts audio system can be upgraded with either the Bang & Olufsen system of 1500 watts, or for the true audiophile the top-of-the-range Naim audio system with 2200 watts.

Discreet Union Flag First Edition badging throughout the interior and exterior of the Continental GT identify the car’s exceptional credentials, in addition to a unique Union Flag tread plate plaque. 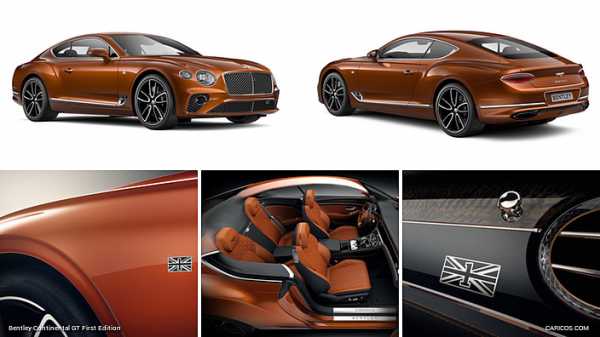 The 2018 Bentley Continental GT is the last of its kind-in a way.

With a replacement coupe and convertible on the way, beginning in 2019, the original Continental GT finally gets to take a rest. On the road since the mid-2000s, the current Conti GT is a bruiser of a two-door grand tourer, still graced with W-12 power, even while its V-8 version drops off radar.

We rate the 2018 Bentley Continental GT a 6.8 out of 10 for its timeless appeal as a luxury grand tourer with lots of power, a hand-built feel, all-wheel-drive traction, and stunning looks. (Read more about how we rate cars.)

In addition to the new Supersports, Bentley introduces a new limited-edition Timeless Series this year, which adds luxury feature content by Mulliner and a Liquid Amber Veneer paint finish.

The Continental is a big car that weighs close to three tons, but it wears its heft well and looks trimmer than it is. It has the style of a classic grand touring car, with rounded, soft lines and round headlights offset by the sharpness of its side character lines and the lines that define its rear haunches. The convertible top is a high-quality cloth unit that opens or closes in 25 seconds, shuts out the elements well, and further enhances the classic look.

Inside, it’s pure luxury, with an upright design complimented by warm woods, soft leathers, and cold metals. The personality of each individual car is defined by its color palette, though all cars have the look and feel of a handcrafted cabin.

Front seat occupants have good head room and leg room, but elbow space can be tight. Rear seat occupants are pushed together by the needs of the top mechanism and they will want for leg room.

On the road, the Continental GT wears its weight well, too. Power from the W-12 is effortless and the car just flows in a straight line, but it also maintains traction when the roads aren’t dry thanks to standard all-wheel drive. Computer controlled dampers help it both ride well and excel in high-speed sweepers. The weight is most noticeable when pushing the car into tight corners.

Every Continental GT comes well equipped, and Bentley offers a variety of packages to turn up the luxury and let buyers personalize their cars.

This generation of the Continental GT hasn’t been crash tested and doesn’t offer the active safety features that have become common on mainstream cars, let alone high-end luxury cars. With a redesign on the way, that should change soon.