Building on its early success and the rapid growth of the segment, Chevrolet today introduced the 2017 Trax – a more expressive take on one of America’s best-selling small SUVs.

“In the fastest-growing segment, Chevrolet Trax’s momentum is sure to continue with great design enhancements, premium details, and the latest technologies,” said Steve Majoros, director of marketing, Chevrolet Cars and Crossovers. “Features such as Apple CarPlay and Android Auto compatibility and four new active safety features offer customers more than most competitors – and at an entry-level price.”

With sales of 63,303 in 2015 – its first full year on the market – the Trax quickly climbed to the second-best-selling small SUV in America. It is also ranked in the top three globally, achieving more than 400,000 sales in 73 markets since its launch in late 2012. China and the United States are its top markets.

In the United States, more than half of Trax’s customers with a trade-in turned in something other than a Chevrolet. Trax also attracts nearly 60 percent female customers – the highest percentage in the brand’s entire lineup.

“With the Colorado and Trax, Chevrolet and our dealers are able to offer brand-new entries in fast-growing segments, which helps bring new customers to Chevrolet,” said Majoros. “And with other new vehicles such as the Cruze Hatchback and Bolt EV, we will continue to attract new customers to the Chevrolet franchise and continue to grow market share, as we did in 2015.”

The 2017 Trax goes on sale this fall, offered in LS, LT and new Premier trims.

The Trax’s fresh, contemporary appearance reflects the modern face of Chevrolet around the globe. A new grille and headlamps echo the styling elements seen in new Chevrolet models such as the Malibu, Cruze and Volt.

At the rear is a new fascia and dual taillamps, with the Premier model featuring LED signature lighting. The Premier is also offered with new 18-inch aluminum wheels.

A modified instrument panel is the foundation for the 2017 Trax’s premium interior enhancements. It interprets Chevrolet's signature dual-cockpit design more expressively, with an upper dashboard hood that flows uninterrupted across the panel to enhance the perception of spaciousness.

“Customers will really notice the elevation in the Trax’s interior design and attention to detail,” said Kim. “It’s an environment that transcends segment boundaries, offering rich, premium appointments and seamless integration of the technologies they rely on most.”

Also new for 2017 is the instrument cluster, which features a new gauge display with prominent analog speedometer and tachometer readouts along with digital displays from the standard driver information center.

With the 4G LTE connection, Trax allows passengers to connect up to seven personal devices such as smartphones, laptops and tablets, to high-speed wireless Internet. Keyless Open and Start also add to the Trax’s roster of available new technologies.

New active safety features are designed to help alert drivers to potential crash situations. They are available depending on the model and include: 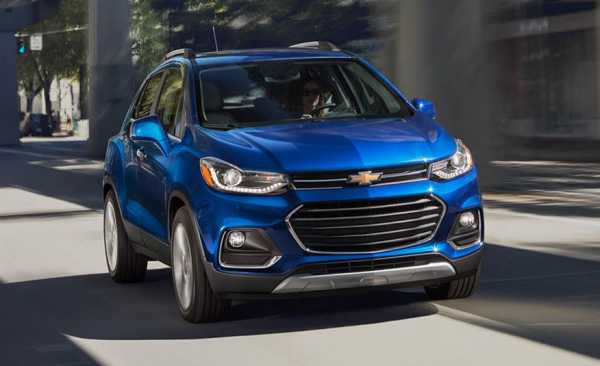 Late last year, we invited a Chevrolet Trax to compete against five of its peers in a comparison test. Although its roomy interior and surprisingly composed handling impressed us, the Chevy’s cheap cabin and “terminally dull” exterior design ultimately let it down. When the dust settled and the scores were tallied, the Trax finished in sixth place among six.

Fortunately, our most damning gripes have been at least partly addressed in Chevy’s refresh of the Trax for the 2017 model year. An all-new dashboard is primped with details like available contrasting stitching, chrome accents, and an analog speedometer that nestles around a new 3.5-inch digital information display. An improved 7.0-inch MyLink touchscreen infotainment system adds both Apple CarPlay and Android Auto compatibility and now also includes a physical knob for volume control, as well as a quartet of additional hard buttons. Regrettably, the new dashboard’s improved perceived quality comes at the cost of last year’s lidded dashtop-mounted storage bin and secondary glovebox. Meanwhile, the Trax’s door panels continue to be lined in cheap plastic, and the front passenger seat lacks an inboard armrest.

As before, the slab-sided Trax’s hatch opens to reveal a class-competitive 19 cubic feet of cargo space behind its 60/40-split rear bench. The rear seat can accommodate two comfortably and three in a pinch. Folding the back seats expands cargo space to 48 cubic feet, while a fold-flat front passenger seat adds even more versatility. Newly available safety and convenience features include blind-spot monitoring, lane-departure warning, and rear cross-traffic and forward-collision alert systems, as well as a proximity key with push-button start. Each of those items comes standard on the $26,995 Trax Premier, and all are available as optional extras on the midline, $23,795 Trax LT. None of these features are offered on the bottom-of-the-barrel $21,895 LS.

No matter the trim, all 2017 Chevrolet Trax models wear Chevy’s handsome, if somewhat generic, corporate face. The new mug leaves a visual impression that the Trax is both taller and wider than before, even though both measurements are unchanged. Overall length, however, is down by 1.3 inches.

While base Trax LS models make do with a set of standard halogen-bulb headlights and daytime running lights, LT and Premier examples class things up with a pair of projector-beam headlights and LED running lights. A new rear bumper and mildly revised taillights complete the 2017 transformation.

In spite of its refreshed looks, the Trax is dynamically unchanged from last year. Momentum continues to come courtesy of a 138-hp 1.4-liter turbocharged four-cylinder engine—the Trax doesn’t get the newer, 153-hp 1.4-liter turbo that’s available in its sister vehicle, the Buick Encore—mated to a smooth-shifting six-speed automatic transmission. Front-wheel drive is standard, as are rear drum brakes; however, all-wheel drive and a set of rear discs can be added to any Trax trim for $1500. Good low-end torque—the Trax’s maximum of 148 lb-ft is available at 1850 rpm—assists in low-speed acceleration. As speeds increase, though, the little mill feels perilously overworked, especially when equipped with all-wheel drive. The last all-wheel-drive Trax we tested, in the aforementioned comparison test, took a lackadaisical 9.8 seconds to reach 60 mph, and we have no reason to believe a 2017 model will be any quicker. No matter how many wheels are driven, though, the Trax sips fuel more quickly than do competitors such as the Honda HR-V and the Mazda CX-3. Front-wheel-drive Trax models are rated at 25 mpg in the city and 33 mpg on the highway (down from the 2016 model’s rating of 26/34 mpg), while all-wheel-drive versions register figures of 24/30 mpg (down from 24/31).

As before, the Trax rides comfortably enough, especially when equipped with the LS or LT’s 16-inch wheels and tires. (We found that the Premier’s 18-inch wheels and low-profile tires let a fair amount of impact harshness into the cabin during our drive through Chicago.) Meanwhile, quick steering and limited body roll add to the Trax’s nimble driving experience, and a high H-point and low beltline boost the vehicle’s sense of maneuverability.

No doubt, the 2017 Chevrolet Trax is a marked improvement over last year’s model, as its refreshed styling and dashboard, as well as additional safety features, put a nice coat of polish on some of the vehicle’s duller aspects. Still, the Trax labors against its remaining lackluster elements, chiefly its strained powertrain.

The 2017 Chevy Trax is the brand's smallest crossover vehicle, a near-twin to the Encore from Buick, and a distant relative of the Chevy Sonic.

A tall-riding hatchback with seats for as many as five passenger and with available all-wheel drive, the Trax gets a refresh in 2017, with newly updated styling, a tweaked interior, and new safety technology.

We give it a rating of 5.6, with credit for good fuel economy and technology for its size, recognizing its styling and performance aren't necessarily its focus. (Read more about how we rate cars.)

For 2017, the front fascia, grille, and headlamps take on the look of recent vehicles, such as the Cruze, Volt, and Malibu. The rear fascia is new, too, and LED signature lighting and taillights are available on higher-end models. However, the base model still has budget-grade black door-mirror pedestals and it lacks roof rails and some chrome trim.

Though the Trax is redesigned for 2017, it remains mechanically unchanged. U.S. models continue to be powered by a 138 horsepower, 1.4-liter turbocharged inline-4 paired to a six-speed automatic transmission. That gearbox features wide gear ratios allowing for relatively swift acceleration from a stop, but a deep overdrive sixth gear for fuel-efficient freeway cruising. Unfortunately, the little four struggles to get up to highway speeds and requires plenty of space when passing.

Inside, the instrument panel and dashboard have been redesigned for 2017, trading a motorcycle-style instrument display with digital readouts for a more flowing dashboard design with analog gauges, extra bits of chrome trim, and available dashboard contrast stitching. While the look is more traditional and certainly improved, there are still plenty of hard plastics, and the overall effect is still utilitarian, practical, and low-end.

The small crossover based on Chevrolet's subcompact, the Sonic, can seat four adults comfortably or five if the three in back don't mind rubbing shoulders.

The Trax offers an impressive list of safety equipment as standard, including a rearview camera, electronic traction and stabilty control with rollover mitigation, and a cabin filled with airbags---10, in fact. For 2017, Chevrolet also offers blind spot monitors, rear cross-traffic alerts, forward collision alert, and lane departure warning. The forward collision alert system could be enough to earn the 2017 Trax a Top Safety Pick+ designation from the IIHS, but we'll have to wait for those results.

Chevrolet offers the 2017 Trax in three flavors: LS, LT, and Premier, the latter of which replaces the outgoing LTZ trim across the Chevrolet lineup.