Renault Sport is proud to be taking the wraps off New Renault Mégane R.S. at the 2017 Frankfurt International Motor Show. Since the launch of the original Mégane R.S. back in 2004, the model has carved out a strong reputation in the high-performance C-segment and become widely regarded as a benchmark in its class.

New Renault Mégane R.S. takes Renault Sport’s unmistakeable hallmarks of agility, efficiency and driving enjoyment a step further thanks to a more finely-tuned chassis performance permitted by 4CONTROL technology complete with four-wheel steering, a first in the segment. An all-new 280hp/390Nm engine has benefited from synergies within the Alliance, and, for the first time, New Renault Mégane R.S. is available with a choice of two transmission options.

Order books for New Renault Mégane R.S. will open in the UK in spring 2018.

“I was involved in New Renault Mégane R.S.’s development and I am proud to be its ambassador. Thanks to the new technologies it packs, including 4CONTROL technology, New Mégane R.S. is even more efficient and nimble than its predecessor. It’s a delight to drive.”

New Renault Mégane R.S. stands out through its specific proportions. In addition to the bespoke lines of its flanks, including wider wings which have been extended by 60mm and 45mm at the front and rear respectively compared with Mégane GT. Meanwhile, its overall width has been increased and new 18 and 19-inch wheels have been designed to provide a better stance and further enhance cornering performance.

Forceful styling features incorporating cues from the world of motorsport

The design of the sides features:

A new body colour has joined the Mégane R.S. family – Volcanic Orange. Like Renault Sport’s iconic Liquid Yellow, the new finish benefits from special work to combine a unique sheen with a special effect as light reflects off the body. It also injects added dynamism and is perfectly coordinated with the car’s cabin where the following features contribute to New Renault Mégane R.S.’s distinctive interior ambience:

Renault Sport’s acclaimed engineering expertise has taken the performance of New Renault Mégane R.S. to a new level thanks to two new features that are unique in the car’s segment.

New Renault Mégane R.S. carries over the key features that helped to forge the success of previous-generation versions.

An all-new engine that benefits from synergies within the Alliance

To enable this engine to produce this level of power and torque under the bonnet of New Renault Mégane R.S., Renault Sport focused its development work primarily on the cylinder head, air intake and exhaust.

This engine emits 155g/km of CO2 (a considerable 11% reduction compared with the previous generation Mégane R.S.), while NEDC combined-cycle fuel consumption stands at 6.9 litres per 100km[3] (which equates to approximately 41mpg).

A choice of two types of transmission

For the first time, New Renault Mégane R.S. offers a choice of transmission for its new 280hp TCe engine.

The ratios and gearshift calibration were developed by Renault Sport to combine performance with efficient fuel consumption, while the EDC transmission’s gear shift times have been optimised for greater performance and driving enjoyment.

The EDC transmission stands out through a number of specific features:

Thanks to its on-board telemetry system, R.S. Monitor, Renault Sport extends the R.S. experience beyond the act of simply driving. The latest version features new graphics and is even more user-friendly, with a choice of two configurations:

Performance in all situations

Already a feature of New Clio R.S., Renault’s multi-reflector R.S. Vision LED lighting system was a natural choice for New Renault Mégane R.S. Taking the form of a chequered flag – another nod to the world of motor racing – it is incorporated in the front bumper and frames the F1-style blade. This patented technology, which is exclusive to Renault Sport, delivers high-performance lighting and includes the fog lights, cornering lights and dipped and main beam head lights. R.S. Vision stands out as an unprecedented lighting package in New Renault Mégane R.S.’s segment to ensure a level of visibility worthy of the car’s high-performance pedigree.

A personalised experience courtesy of MULTI-SENSE

Renault’s MULTI-SENSE system and its choice of five driving modes personalise the driving experience by adapting engine response (via the pedal mapping), the firmness of the steering and gear shift speeds[4].

The R.S. Drive button provides shortcut access to the Sport and Race modes thanks to a short or long press respectively.

Driver aids designed for everyday use

Now a five-door hatchback, New Renault Mégane R.S. is even more suited to everyday use, while losing nothing of its dynamic, sporty character.

A suite of Advanced Driver Assistance Systems (ADAS) allows it to be driven in all types of situation.

Its palette of driving aids – all accessed and activated or deactivated via the R-LINK 2 tablet – provide the following functions:

We are roughly two months away from the official reveal of the new Megane RS, but thankfully we won’t have to wait until the Frankfurt Motor Show to see Renault’s highly anticipated hot hatch. Thanks to a batch of patent images published by the World Intellectual Property Organization (WIPO), the new performance model is showing its body from all angles without even the smallest strip of camouflage to get in the away.

As expected, the new Renault Sport adopts a slightly more aggressive appearance compared to the warm GT. The design perfectly matches what we have seen already in numerous spy shots and teaser images: big air vents up front, flared wheel arches on the sides, and a generous central trapezoidal exhaust tip nicely flanked by the diffuser’s vertical fins.

There are some novelties we are able to discover thanks to the patent images. For example, the headlights seem to feature slightly different graphics than those of current Megane models. It’s the same story at the back where the taillights look a tad bit changed as well while below them is a muscular bumper with two side scoops. We can also catch a glimpse of the checkered flag motif of the LED fog lights in the same vein as the Clio RS.

These patent images are not accompanied by any new details about the Megane RS, but Renault has already disclosed a lot of the juicy specs. It will be available with both a manual gearbox and a dual-clutch auto delivering power to the front wheels. How much power you ask? Rumor has it about 300 ponies, either from the Alpine A110’s 1.8-liter or a new 2.0-liter unit. The company’s 4Control all-wheel steering has been confirmed, along with a choice of Sport or Cup chassis.

September 12 will be the day when Renault will finally introduce its Civic Type R fighter. 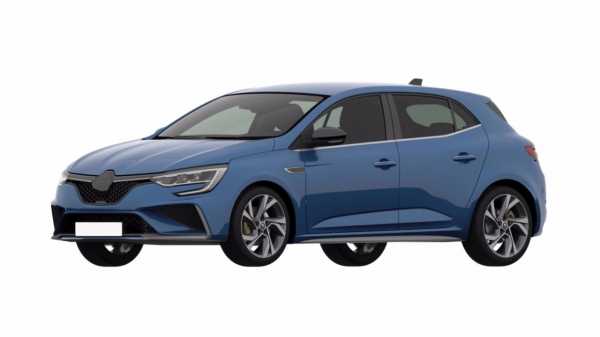 In related news, it looks like the aforementioned GT is about to go through a nip and tuck. It’s getting the same headlights and taillights as the RS, along with a meaner front bumper with enlarged air vents compared to the current car. It seems rather early in the life cycle for an update, but maybe Renault wants the GT and RS to share more of the design cues and at the same time distance themselves from the lesser Meganes.

Time to get behind the wheel of the New Megane R.S.

†3 years unlimited km warranty applies to all new Renault Clio R.S. and Megane R.S. vehicles. Demonstrator vehicles receive the balance of new vehicle warranty. Roadside Assistance terms and conditions apply. Call our Customer Service Team on 1800 009 008 or view the Terms and Conditions statement at www.renault.com.au/drivingpeaceofmindfor details. First 3 scheduled maintenance services capped at $399 per service on new and demonstrator MEGANE models, based on standard scheduled servicing from new and on normal operating conditions. Scheduled maintenance services required every twelve (12) months or 20,000km (whichever occurs first). If vehicle is not presented within three (3) months of when the scheduled service is required, right to that capped-price service under the program is forfeited. Renault Clio R.S. & Megane R.S. are subject to adaptive servicing requirements, as determined by the Oil Condition Sensor, and may require servicing prior to the standard 12 months or 20,000km service interval

While at first you’d be tempted to say this is nothing more than a camouflaged Megane GT, in reality Renault was testing the hotly anticipated RS version on the snowy roads of Sweden. The “Brembo” lettering on the front brake calipers discloses the prototype’s true personality, as does the new exhaust system with dual tips mounted in the middle of the rear bumper in typical RS fashion. Not only that, but why would Renault test the Megane GT considering the warm hatch has been around since late 2015?

Now that that’s settled, the Megane RS is expected to bow in full production guise in September this year based on a leaked internal document pictured below. It probably means Renault will officially introduce the range-topping version at the Frankfurt Motor Show ahead of a market launch set for late 2017 / early 2018.

The million-dollar question is: front- or all-wheel-drive? The latest prototype doesn’t have any clues that would indicate the implementation of an all-paw setup, so chances are the next Megane RS will stick to its FWD setup. Based on a report from a few months ago, the five-door-only model will make use of a newly developed 2.0-liter turbocharged gasoline engine, which may or may not be shared with the upcoming Alpine sports car.

In charge of sending roughly 300 horsepower to the front axle will be an adaptation of the Nissan 370Z’s six-speed manual gearbox featuring rev-matching tech. At an additional cost, buyers will be able to opt for a dual-clutch, automatic transmission set to employ a launch control system.

While the Megane GT has four-wheel steering as standard (and you can’t ask Renault to remove it), the RS will have the system available as optional kit to allow the buyers decide whether it's worth the extra weight or not. The rumor mill is indicating Sport, Cup and Trophy suspension setups are on the agenda, along with optional adaptive dampers.

When it will arrive, the Renault Megane RS will allegedly take down the record for the fastest front-wheel-drive production car on the Nürburgring. Time to beat? That’d be 7 minutes and 47.19 seconds achieved by the VW Golf GTI Clubsport S in October 2016.